How do you spell LOVE? 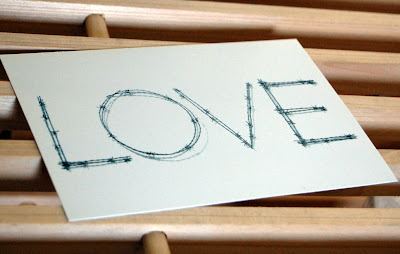 Officially, I have joined two dating sites. In doing so, I've spent a lot of time cruising through my 'matches'.....wow......um....well.....hmmm. Worse than that, I've had to write a profile for myself.....and on eHarmony they make you take a test.....seriously, a personality test so they can match you with someone who will want to date you. Seriously. I'm starting to think no one will want to date me.....in fact, I've not had any action.....just a few look sees. I'm not ugly, I am 'curvy' (because I refuse to call myself "a few extra pounds") and I'm funny, witty, smart and loyal....kind of like my dog....I'm even sort of short, like my dog....he's a daucshund. That aside, it is gruesome out there.

I've been told I'm too picky....but this is my life, don't I get to be a little picky? At one point I convinced myself to just send an email to everyone I've been matched to, but felt this really scary, tight feeling in my chest when I started to do it. In real life, not on eHarmony, I'm not so into looks, money or status, in fact I usually fall for the guy with the best sense of humor, who is happy to be fishing every day for the rest of his life (not that there is anything wrong with that) and who likes his dog better than most of his family.....but clearly that hasn't worked for me either, as I am alone.

Oh, and my favorite, the guy who posted a picture of himself, STILL WEARING HIS WEDDING RING.....he was NOT a widower.

And, people who don't put a picture up.....in some ways I think it's a good tactic, "if you like what you read and your focus isn't on my looks than you are worthy"....but if I'm on the same dating service as you and I contact you for a photo, bet your sweet ass you're going to look at my photo (because I put one up) before you contact me back, right? Crappy double standard.

I also find myself eliminating the guys whose preferences lean toward "athletic/toned" and "slender", because, let's be serious, like that guy's going to want me....I DON'T DO EXERCISE....I do activities, biking (when I can get motivated), dancing, walking through the park/forest/city/acreage/ocean, working in the garden, but NOT exercising....'less of course you call cooking some kind of exercise.

I also find that I'm eliminating the guys who work in the field I used to work in....I'm out of that crap, not going back in, even vicariously. Not that there is anything wrong with that industry......hunh.

I'm only doing this for a month.....that's it...then I'm cancelling the memberships and bagging it....this gives me plenty of time to find a date for Valentine's day, right?

I found a match this morning that actually appealed to me on MANY levels and I have to share with you what the hooks were.....he's a little younger than me, so he might not be interested (just four years), but I sent an email telling him what 'got me'.... Not only did he give attention to my insecurities about MY weight, he mentioned he was almost at his goal weight and wanted soemone who was in that same place (I liked this because I'm almost always 'near' my goal weight) and he said he is looking for "someone who turns on the light, instead of cursing the dark" and I liked that....(I know sometimes I come off as dark and sour, but really, I am always searching for a way to turn on the light). And, touching me in the heart he says, "I still believe in forever love. It might be a triumph of hope over experience, but I still believe." This, I LOVED..... (he had me at hello).

Labels: looking for love in all the wrong places hoping against hope to find the one

I hope that you find someone as kind and caring as yourself. Those dating sites can be rough on a persons self esteem. I did some personal ads back in the 90's

oh you've got me on the edge of my seat...best wishes!

Don't count out guys who aren't perfect spellers. I know many very smart people who cannot spell. Sir Winston Churchill was a lousy speller. My husband is very smart and he is a bad speller. I just assist him and that I find kinda cute.
The one you do speak of in your last paragraph sounds very interesting to say the least. Good luck!

Yep, you DO get to be as picky as you want. Never settle for less!

Good luck with this. Looking forward to updates on your upcoming dates.

Oh GOOD FOR YOU!! And yes please be very picky, all the points you object to are really valid ones. That said, he he, I didn't put a photo of myself on the hideously named woohoo.com (now part of match.com) but MrSpud broke his own rules of 'don't approach anyone without a photo' because he liked the answers to the 'set' questions. I was too afraid to put a photo up! Anyway, 9 years later, 5 years married, 2 megaboys...I'd say 'Good call' to MrSpud.

Lots of luck to you. Be picky, don't settle. Be happy xx

Be as picky as you want. Getting out of a relationship can be much more difficult than getting into one. I'm keeping my fingers crossed for you... keep us posted!

I'm trying to catch up on the blogs I follow so I'm late in responding here. So - tell me - anything happening here with "Mr. Right Now"? Spill it!