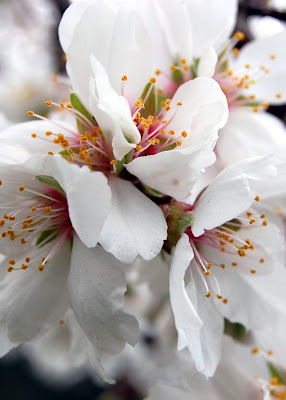 I have like a ton of stuff I need to purge....my little brother, (just 18) is getting married, May 1st and while he's in basic training, my Dad, my Sister and I are planning the wedding. Why us instead of the bride and her family? Because baby bro decided and ANNOUNCED right before we shipped him off to boot camp, that HE would be paying for the whole wedding. Yep, you got it, he buried himself(and us). It's not really a big deal, but navigating the family dynamic mine field is something I'm not fond of, nor am I good at.

AT the core of the family dynamic issues I'm most concerned about are those of the relationship our side of the family has with my Bro's mom. "V" is my age, when she worked for my father as his secretary, they began an affair that resulted in having my Brother. V did everything she could to destroy my dad and then even went so far as to try to keep him from my Brother, or rather my brother from my father. She made heinous accusations in court, used every stall tactic she could and then when none of those worked and dad won visitation and partial custody rights she tried to poison Bro against dad...when that didn't work she did what she could to make Bro suffer for the relationship he and dad built. Needless to say, bad feelings about this woman abound. All of the time that V was trying to wreak havoc and destroy what she could dad just kept telling my sister and I that he was not going to play her games and eventually Bro would see her for who and what she is and come to his own conclusions....last summer he did and he moved in with dad for his last year of high school. Dad was hoping this would happen much sooner and they would have a longer 'bonding' period, but alas, it did not.

The reason for the move was a culmination of events, but the crux of the matter is that Bro finally decided he hated his mother. To me this is sad, part of me has this feeling of, "you get what you deserve, b**ch." and part of me feels sad for Bro that he and his mother are estranged from each other, because I don't care how old you get, you still need your mom. (yes, I know some mom's don't deserve that, but from a purely 'perfect world' perspective, we all need our moms).

Because of what V did to my dad and my whole family, I have some hard feelings about her. I have tried over the years not to care, she's really not worth the emotions, but she is a heinous person, doing what she could to maliciously hurt all of us even her own son. Since Bro moved out of his mom's house and in with dad, we've all tried to encourage him to make amends with her, or at least let her make amends if she was making efforts, he's been reluctant but at least repaired their relationship to a speaking to each other status.

{I would never condone or press anyone, especially someone I love, to continue to engage in a relationship with someone who was spiteful and harmful to them, but for the greater part of my brother's life, he wanted to and stayed with his mom, for whatever reasons, so there had to be love there somewhere, so my concern about repairing their relationship was only based on how it might affect bro in the long run if he did not make the effort to repair things to his tolerance.}

In the days when my father and V were together, V and I were friends.....we spent a lot of time together, right up to the time she betrayed my dad....and although I was happy to part ways with her as my friend (at the time I was only 25 and in the middle of something I had no business being in the middle of) I never really forgave her, for the betrayal and the subsequent war she enacted against my dad and my family. So, I come to the day when I must face this anger and resentment and find forgiveness....if not for me, for Bro and the family. For the most part, V is not on my radar until I hear a story about her behavior toward my little brother and although I know that holding onto any anger, resentment, even hate only diminishes me, I cannot help but feel negatively toward her.

There was a time when I believed that V was beyond redemption and in fact referred to her as the Devil's spawn, but recently I've begun to see a glimmer of light....I believe losing little bro to the 'dark side' (that would be our side of the family) has humbled her. She recently contacted dad about plans to participate in boot camp family day and graduation, she called to inquire if it 'would be alright' if she went? Much to my dad's surprise she was nice, solicitous and humble. We're a little afraid, but still hopeful.

When we initially talked about the wedding Bro felt that V probably would not come to the wedding because we are having the wedding out at the ranch, dad's house and Bro felt that V would cite 'hostility' on our part if she came. We of course countermanded that assumption and told him emphatically that she was welcome and 'expected', as his mother, to be at the wedding. I, for one, am relishing the day when she sees how wonderful and beautiful our relationship with Bro is despite her efforts and want her to see that what she tried to destroy flourishes. (I know, spiteful, aren't I?)

So, this evening I am going to call her and extend an olive branch....I know, arrogant of me, ain't it? But, I want to put the past behind and move forward. I want forgiveness for all. I was V's biggest hater, the one who spoke out against her with venom and anger (never in front of Bro {until he began his own campaign}) and I invested a lot of energy in 'exacting karma' against V myself.....(you know those secret fantasies about having control over destroying some one's life with malice and forethought?). Wish me luck....I'm hoping for guidance once the conversation opens up.....

And, please don't think less of me for my spitefullness, I suspect it will disipate with time, especially if fences can be mended. (I hope.)

congrats on 200...good job extending the olive branch, you never know what might come of it, but extending it is your part...let them decide how to respond...

I know all about bad family dynamics! It is a waste of time to despise people , though, especially when your paths will likely cross at times!

Good luck with the reaching out!