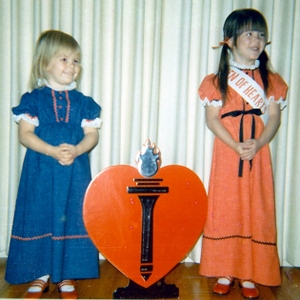 I set out to find something I didn't think I could. And, then, I found it. I have so much to tell and because there is so much to tell I don't really know where to start. Back in November of 2009 I wrote a post about the realization that my life had changed. I spent so many years just accepting the life that I had fallen in to that it never occurred to me that I could change it. Although I was always blessed in that life, I was directionless and not truly invested, and always yearning for something more fulfilling. And, I am back here today sorting out how things have fallen in to place.

I began blogging as sort of an online journal and commentary on taking an active role in my own life. I worked in the same field for over 25 years, hating it and feeling like I was missing some point. You know, THE POINT. I was. I knew it, but had no idea how to get to THE POINT. You can read HERE how I acknowledge this, but that I was aware I was wasting time. There have been soooo many things that have transpired since the beginning of this blog, that upon review, blow me away as I read about the unfolding of my life. And all roads have led to THE POINT. Whether conscious or not, I have been on a trajectory that got me to a place where I truly am invested and want to be.

In 2005, while recovering from my last open heart surgery I met a person who had lived through similar medical situations, through our mutual surgeon. God bless, Richard Mainwaring, MD. As a result of that introduction, my friend, Kathy and I connected over our 'issues' and discovered that maybe the doctors were missing an element of recovery by not connecting their patients to some kind of emotional support system. At the time I looked, but did not find any type of support system, ie; support group of folks with similar congenital heart defects, who survived to adulthood. There was a group that supported adults who had heart attacks, strokes and other acquired heart disease, but those folks could not relate to my scenario and I could not relate to theirs. I asked that group, Mended Hearts, if they had a CHD 'branch' for the adult survivors of CHD, they didn't at that time. It was then that I decided I was going to find a way to help the children and families of congenital heart defects. I did not, at the time have any idea how I was going to do that, but figured I would stumble in to it somehow.

It would be two more years before life provided me with an opportunity to leave the field I was in and start the serious search for THE POINT. In July of 2007 I quit my job in mortgage banking and moved in to my grandmother's house to take care of her at the end of her life. The Hospice nurse who worked with us was the most amazing person and she inspired me. I also learned a lot about myself and the depth of my compassion for another person. After my grandmother's passing I stumbled around for about a year and actually returned for a short stint in the dreaded 'old career'. This return stint was the breaking point I knew I had to come to in order for me to finally GET OUT. Shortly after I started working I hunted down a resume writer and had her write me a resume for the medical field. Although I did not have a lick of experience medically related, (accept of course those pesky trips to the OR for valve transplants), but I knew that my VAST experience in the same field for 25 years could have some transfer potential. The resume writer and I clicked and she created a really great resume and I was just getting ready to paper the town with it when I got laid off......I took this as a sign. With unemployment available to me I went back to school to pursue a certificate in medical assisting. There are few posts about that, here, here and here, but once I figured out where I was going to finish, I got my certificate in February of this year. Of course, then began the long, arduous process of applying for jobs.

Concurrent to my schooling and subsequent job search I found a support group for families of children with CHD, a branch of the previously mentioned Mended Hearts and joined them in August of 2010. I attended the monthly meetings and participated where I could. I felt that this group was a place where I could do some good. I also spent some time, that fall, with my previously mentioned friend Kathy and her new daughter, Lily during Lily's stint in the hospital going through open heart surgery. It was like dipping my toe in the water of the pool I wanted to swim in and I started to feel the ripples of something big on my horizon. It would be several months before things gelled, but I could feel THE POINT was within the reach of my finger tips.

The job hunting process was a bit frustrating and I'm not going to lie, it sucked, because I have actual documentation that I applied for more than 150 jobs in the medical field just trying to get my toe in the pool. Finally, I got the call to go down and take the test that the big medical systems want you to take to prove you actually learned something in school. Two big tests within days of each other and I passed both! Whew!  But, then more waiting for an actual call for a job interview.

About the time all of this was going on I was invited to a leadership meeting with Mended Little Hearts (support group I joined). I reviewed the email a couple of times and took note of the invitees and wondered why I was invited, as I was not sure HOW I got included.....but I took it as a sign, the Universe was calling me out, "either jump in and participate or pack it in and go home". So, I went to the meeting with the thought in the back of my mind I was going to walk away with a leadership role in this great little organization. And, I did. I inquired about the lead coordinator position and eventually agreed to take it on.

Within a short time of accepting the position with MLH I got a call from one of those big medical systems whom I tested for and I interviewed on a Wednesday and the very next day received an offer of employment from them to be a medical assistant!

The next couple of days were pretty euphoric because the realization hit me that I got THE POINT and had reached my goal. I'm still trying to grasp the reality of all of it. This of course is a seriously truncated version of the long story, because there were quite a few stumbles, road blocks, missed turns, and sleepless nights wondering if I am smart enough, compassionate enough, strong enough and brave enough and not too old to be this person. To give back like I have dreamed of doing. To be involved with these amazing kids and their amazing families and to really make a difference in the world. To know what THE POINT of my life is, to leave a legacy I can be proud of.

There were so many important aha moments over the last six years that it would take a book to share them. Maybe some day I will write those down, too.

But, for tonight, I feel like I have collected my thoughts and been able to revel in the beauty that is the Divine. Thanks for the intervention.

smiles. lovely capture of a bit of your journey...the point, to give back...i like that...and so true...knowing your purpose is huge...

Can you possibly imagine how proud I am to be your Dad?!

It's good to hear from you again! I remember when you had lost your job and were debating about going to school. I'm glad you had to tenacity to finish school and you found your place in this world AND your POINT in life! Congratulations!