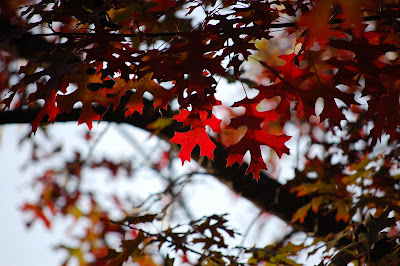 It took just the tiniest bit of prodding, but I think I've figured out what is chasing lady inspiration away. I have things going on in my life that are tough and I find that I am holding back in my writing because I'm not sure I want those things to bleed through....the thing is I need to write about them. So, I'm going to. Heed the warning in the post title, there may be some tough subject matter chewed on here.

I've already divulged here that I am a recovering alcoholic. One of the reasons alcoholism continues in families is that no one talks about it. The disease becomes the elephant in the room and it's affects reverberate for generations. I find that I am standing in the middle of my own life watching the devastation of this disease in my mother, my sister, my nephew, my niece and my brother-in-law. Not only is it affecting their lives, but it overshadows so many aspects of the lives of the people they love and who love them. Breaking down how deeply this disease affects my family would take an encyclopedic sized book.

Alcoholism is insidious. I don't know the people before him, but my mother's father was the first alcoholic I knew in my family. I had only brief encounters with him when he was drunk. I loved my grandfather and loved to hang out with him at the ranch. When my grandparents bought the ranch it was to be their retirement home. My grandmother still had a few years to go before she could retire, so she finished up in So Cal while Papa moved up here and lived at the ranch. Because I loved to hang out with him at the ranch I would ask to go spend weekends with him. I was young, maybe twelve or thirteen, but even then I knew to be aware of how far away the fire station was, in case something happened out at the ranch while I was staying there. I don't know how I knew that Papa had a 'problem' with alcohol, I just knew it. Eventually my grandfather's hard living took it's toll on him and he died relatively young at the age of 67. In retrospect there were so many aspects of the things my mother and her mother did and said that made so much more sense knowing the extent of my grandfather's alcoholism.

What I believe is the crux of my current hurdle is my mother's deeper descent into her alcoholism. Her mother died in the fall of 2007, I've shared my grief here and here and in various other posts, in fact, I spent about eight months in therapy in 2008 processing my grief and various other issues. My mother, however is dealing with her grief a little differently. While I know from my own recovery work a drunk has to decide when they are ready to quit drinking, no one can decide that for them, I find myself dwelling on the well my mother is plummeting into.

I've done a lot of work for myself. I've worked the steps with a sponsor, I've seen a counselor when I felt the need, I've sought spiritual counsel, I've spent a lot of time examining my family dynamics, I know where I come from and where my mother comes from. So, the heart of the matter for me is that I am scared and terrified that my mother isn't going to survive. She is slowly killing herself because she cannot deal with 'where she came from'. It is painfully obvious to many people that my mother is deep in the throws of alcoholism and none of them knows what to do. None of them feel it is their business to intercede. Not even me. I feel impotent to help her, fearing any misstep could make things worse, perhaps alienate her from me, thus putting her in further jeopardy. I have been the care taker in our relationship, from the time I was a small kid, with my own medical problems, I remember that my mom sometimes could not function. Not only did I have to be responsible for her, but for myself. I even cared for her dying mother because she could not bring herself to do it.

What I've covered here is only the toenail of the elephant....my sister functions at a very low level and her young daughter has distanced herself from her mother, positioning herself at her dad's house....her dad an alcohlic himself, raised by a raging alcoholic....who has found out that raising an angry, confused young girl is much harder and scarier than he bargained for. Their dynamic is becoming more complicated and broken every day.

Then again, perhaps letting go is in the best interest of the bellhop.....putting down the bags and giving up the burden for a minute or two....writing down the tough stuff so lady inspiration can find her way back.

I still don't feel like I've gone deep enough....and that I've dressed up what is going on with a story....Otin thinks maybe I'm really sad and that I could be in a bad place, he extended a kindness I am grateful for, because he helped me look closer, but, I think that this is just my life....I have an acoholic mother, a broken sister, and a struggling teenage niece.....without any sarcasm here, "things could be worse."

Of course I can't say anything useful. But... that all sounds very, very tough. Hang in there - you sound as if you have a true sense of direction.

My ex-husband has been clean and sober for 7 years. Of course, our divorce helped him make the change in his life. We are still close friends (because of daughter) and I'm very proud of him. People don't quite 'get it' unless theyve been in it.

Hugs to you, my friend. It IS a tough road, but it gets better, less rocky, more managable as you deal with the problem yourself first and then live by example.

Good to get it down in black and white. Better out, than in. Hope it frees up the channels for your muse.

i am glad that you shared...we have this twisted belief that we can carry these things and should not let them leak out...but only in sharing the burden can we truly learn to carry that which encumbers us. thanks for the toenail...keep working yourself, pray for the others...

All we can really do is love them and be there for them when they're ready. Like you mentioned, they have to get there before we can help or it won't really help.

But perhaps this will free your muse. *hugs*

I agree with Sara. Now that you've shared part of it, that might free some space for musie to come back. I'm also sending hugs and you're in my thoughts and prayers...

I'm sorry you're going through all this pain. I do believe that facing the demons, and writing this down will help you got through it. I'm sorry to hear about all the family members in a crisis with alcohol. But you need to come first. YOU. Get YOUR head on straight, breathe, and pray. God helps those who helps themselves, right? There is only so much you can do for your family. They have to help themselves. I'm not saying you should walk away, turn you back on them, please believe me. Help where you can, but, keep yourself strong, DON'T beat yourself up for THEIR weaknesses. I'll pray for you AND your family. Take care, my friend.

wow... well let me first of all pat you on your back for putting all this down on "paper" for all to see, i know how hard it is... having spilled all my emotions on my blog.
and just trying to give you some words of comfort here... it seems like a very tough situation with many layers... on the one hand it's getting in the way of your own happiness... so do you walk away??... but how can you this is your family, your blood... it's a tough one, just hang in there...and write as much as you can... it helped my tremendously
hugs

You have shown great courage. My son's father is an alcoholic and now he lives with an alcoholic so I'm not sure if he will ever get sober. Alcoholism is awful. My parents parents were alcoholics but mine did not drink. They had all the baggage as if they did but I had nothing to blame it on.

I don't carry any of their baggage and I don't carry my baby's daddy's baggage either. I protect my son and go about my business.

Perhaps you can put down the bags for a minute to see how it feels. If you get scared pick them up again and do it again later. Soon you feel how more comfortable being light with the bags...it just takes practice like everything does.

Be still. Sending lots of positive vibes your way, my friend.

One thing that I have learned is that you cannot fix everyone! The trick is not to let everyone make you broken!