"To live in hearts we leave behind is not to die." Thomas Campbell "Hallowed ground" 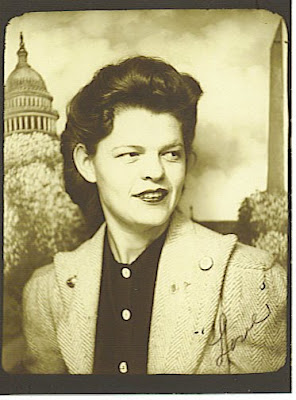 Grief is something that takes a while to process. I suppose there are 'exptected' timeframes, but, I'm of the beleif that it is individual. After my Grandmother died, I spent some time with a counselor, working through my grief. Next month it will be two years since my Grandmother died....and last year on the anniversary I sequestered myself at home and just honored my feelings. I feel like, for the most part, I've worked through the heavy parts.

My Grandmother had Osteoporosis so bad that she began to suffer spontaneous breaks and fractures in her hip and pelvis. Eventually, the breaks were too severe and the Osteo was so bad that she was bedridden and I moved in and took care of her at the end of her life. (Personally, I think she knew how bad the osteo was, but, played dumb, and it was her way out of this life so she could be with my Grandfather again....) In other words, I was prepared for her death in a very clear way. I knew my Grandmother well, we are alot alike. Anyway, I feel the hardest part of the grieving process for me, was letting go of her 'things', as they somehow seemed an extension of her and as long as they were around, she was still around.

One of the things my Grandmother was known for is her massive collection of salt & peppers, at last count, there were over 1700 sets! She had a large home with a very large formal living room that became her miniature museum of salt & peppers.....as a family, not one of us could keep the whole collection together in anyone's home and for the most part, my Mother and Aunt did not want them. We each kept a few for ourselves, but, then went about selling the salt & peppers in a booth in the local antique plaza - "The Antique Trove". My Mom, Sister and I set up a booth with the curio cabinets that most of the s&p's were displayed in and the 3 of us cultivated our little shop. Each week we would stop in and rotate the stock and add as we needed. I even briefly took a paying job at The Trove and spent some time learning about antiques and collectibles. I believe this experience helped me tremendously process my grief.....

Our booth was adorable and we had a shop name and business cards and the story of how we acquired such a collection was prominently displayed in the booth. I was able to talk about my Grandmother adnaseaum, if I wanted to and I believe that helped me....to talk about her and to honor her memory by telling her story every chance I got. And being at The Trove was like being in the past....sort of dwelling in a time before her passing.

After I quit working at The Trove and we closed down our booth (the remainder of the collection was taken over by my Aunt and her husband and they are selling them on ebay), I did not go in to The Trove, I just quit going in there....before we had our booth their I visited quite often, as I love antiques, but, once we closed down the booth I stayed away. Until yesterday......

When I walked in I was overcome by a wave of memories. I began to wander around, up and down the aisle like I did when I worked there....I was very familiar with the other vendors and the things they carried and I had a path I followed when I would go in there. I began my usual course and meandered through....and I slowly began to feel my Grandmother and wave after wave of memories of her just washed over me. As I rounded the corner of the aisle where our booth was, I began to tear up.....the booth no longer exists, they've remodeled and our little booth is now an extra big booth that sells over priced antique furniture. I felt silly, because I wanted our booth to still be there....just as it was when we were 'shopkeepers'. I wanted that familiar look of her things, right there, displayed for my viewing pleasure. But, they were gone and so is She.

The rest of the day my Grandmother lingered with me. Even today, She is permeating my thoughts. Is this lingering grief or just memories sneaking up on me? My Mom says my Grandmother visits her sometimes in the night, when she's asleep....She visits me, too, but, yesterday, She was more palpable, more present. I miss her.
Posted by An Open Heart at 1:40 PM

Oh I am sorry and do know how you feel. I loss my grandmother 3 days before hurricane Katrina, which devastated my coastline of Mississippi. We barely had time to deal with my grandmother then turn around and have to deal with all the devastation. I was so thankful she didn't have to witness what Katrina did...as we all had gone through Camille and thought that was bad...it was just a lil storm compared to Katrina. Needless to say both these anniversaries are coming up. My mother and I were discussing it this morning.

hey me again..just didn't know if you were aware but when I send you a comment I get this sent to me. Just FYI

I went through that process of grief and the going through there things...very difficult indeed...However, knowing that they are looking out for me , as I get visits too, and help me reflect on the people who made me who I am today. They can visit anytime they like now. Peace, great post.

Grieving is a process that we keep revisiting at different levels of resolution. It is like a wound. At first it is gaping, open, oozing . . . then slowly as you grieve and remember and talk, it starts to close. But the wound is always there - and if you are in a circumstance that kind of pokes or presses on the wound, it will be tender, and you will have feelings about it. However, the feelings should be a little less raw and intense.

What you are experiencing sounds perfectly normal to me. You honor your bond with your grandmother with your tears - but she would not want your life to become about grieving her. Live your life - sadness will appear and disappear . . . this is the way of it. Try to recall happy moments you had with her and not just the loss.

That was very touching, made me teary eyed.