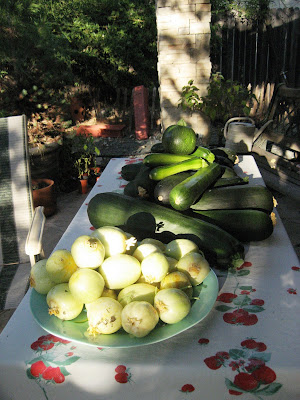 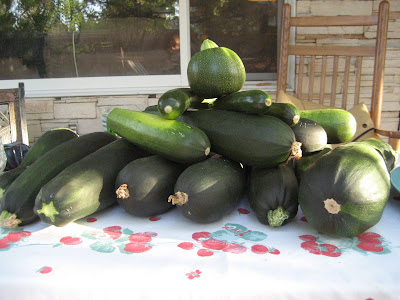 I always end up with too many zucchinis and then, the neighbors won't answer the door when I come around....But, I really can't help myself, there is such joy in the bounty produced by just one zucchini plant and I love to feed everyone. We're having a time with the tomatoes though, still none ripening. Friends and neighbors are surely waiting for the tomatoes, but, not the zucchini.

As I am going away for the next three days, roomie, is going on her own adventure, I figured if I didn't check the garden and pick what was ready, surely, I would find that the zucchini's had grown legs and moved into the house....I think I had a couple that bordered on 5lbs or more - a couple looked like the size of a hefty newborn. If you are not vigilant in your search through the huge leaves, you miss a little guy and the next thing you know he's talking to you like he's a grown child, "Hey, lady, you missed me last time and since I grow 6 inches every 8 hours, I'm the size of your 13 year old neice now, pay more attention next time or you'll be moving some of us out of here with that bobcat your friend has". We harvested 16 zucchini tonight, half of which were by anyone's standards, HUGE.....

Note to self: must be more vigilant in search for garden bounty, remembering to check zucchinis TWICE.

The lemon cucumbers are rather abundant, too, however, those are easier to give away in quantities, as they do not get as big, obviously. I think we netted 25-30 of those tonight....I am taking them with me to the Monastery this weekend as a contribution to the kitchen. There are so many more, just waiting to ripen, hidden under the massive vines that are spreading out all over the place.

We checked the watermelons, too, we have about 9 of those. We picked one, not sure if it was time or not, we cut into it and it had just begun to turn pink....we tasted it and there was the slightest hint of sweetness, actually edible, very juicy, so not necessarily a waste...but, they all still have a week or more of time they might need to be on the vine.....this is my first year with the watermelon.

I had such high hopes for the garden, I was going to plant so many different things, but, a storm ruined all of my seedlings, so, I just purchased some plants, not nearly as many as I had from seed, so, I guess, considering how much the garden is already producing, I'm better off. The pepper plants have tons of blossoms, as do the beans...but only two little peppers are on one plant and only two beans, as well. Many tomatoes on the plants, just no red.....when they go, we'll be buried in them....oh, well, EVERYONE loves home grown tomatoes. Surely, they won't turn me away if I bring tomtatoes with the zucchini, right?
Posted by An Open Heart at 8:59 PM