"My Friends are my Estate". - Emily Dickinson 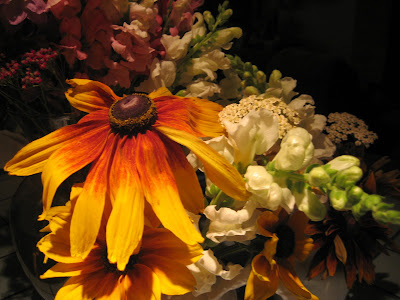 .....and, my blessing. Had a great day with all of my people...yes, they are my people. You know what I mean, my people, those who get me and love me, just the way I am, barnacles and all and whom I love, just the way they are, warts and all. We gathered to celebrate my Dad's birthday, which is offically July 4th and share a meal. Dad had a wonderful day, as all of his kids, this includes my people, as he has quite adopted all of them for himself, as well, were around to partake of the celebration of him being on this here planet for 65 years....! I would have posted some sort of photo commemorating the actual birthday party, but, I was not quite the photograhper I like to think I am, today....no decent shots that weren't just present opening snapshots.....so, please enjoy the lovely flowers, instead. (aren't they great?)

So, to carry on about my friends and our celebration....I so LOVE my friends, (family, too, but, since I don't choose them.....right?) and how we all have shared humor and that we rib each other mercilessly, without apology, in fact, expect it from each other, knowing that if we show weakness, we are sure to be the target.....all in good fun. We had an exceptionally big group, lot's of new friends, who managed to hold their own in our crowd, which can be awkward and somewhat daunting, since the old timers have a shared history...but, the newbies managed.

I am one of those people who loves to include everybody and I usually have a sense of who will fit and who won't and who to invite to one occasion, but, not another....and once in awhile, I choose wrong and someone new, will not quite fit and I feel bad and wish that I could have a do over with them and their introduction to the 'group'....I sort of got that chance today and the second time around, fun was had by all. I tend to have several uniquely different friends and the really different friends don't always do well with my core group....which for me is a little tough, because, really, I like to include everyone, especially when I want to entertain and feed people.

Today, two couples who I previously attempted to introduce into the core group and did not seem to fare well the first time around, (both couples left early, after spending most of the evening huddled in the corner or hanging out in the kitchen trying to help {which I don't mind, accept that I wanted them to enjoy the party}), came to the party, this was good, because, both new couples are actually fun, smart, creative and would be great friends with others in the 'core group' (I know, it sounds like I throw seminars for people with social disfunctions or something, I guess, I'm having a hard time really articulating tonight, because that is not even close to what I'm trying to say), so, the fact that both left early and with fear and panic on their faces, left me feeling like I had not succeeded in 'adding them' to the group. I did not give up though and even after I invited the two couples, trepidation creeped in, but, I'm glad I included them again, as they were able to enjoy everybody, the party and 'my people' enjoyed my "new" people. (I own them, you know, my people, like I'm the Queen or something, right?)

I really like having my people around, I looked forward to this party ALL WEEK long and it was all I hoped for....integration for my new people, OH! And.....Dad had a great birthday celebration, too!
Posted by An Open Heart at 11:24 PM

Labels: just my people, My people, not my subjects

It sounds a great success, and thoughtful of you to worry about how everyone fits in and whether they are enjoying themselves. Not everyone does that which is a shame.

I love those rich colours in the photo.