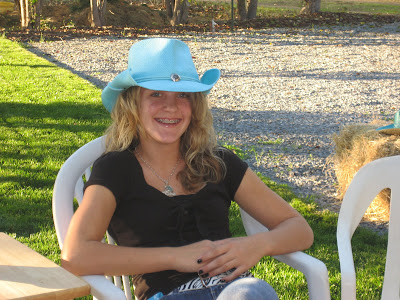 She's a good girl....really. She's everybody's friend and she is the champion of the underdog, everytime. And, she is very mature for her age, too mature. She looks after too many people and she's had to grow up too fast. I really regret that for her and wish that I could have done more to help her along....but, how much is too much for an aunt to do? I try to be there and listen and when it looks like she's thinking down a path that will hurt her I try to guide her without sounding like a judge....(I tend to be judgemental, I'm working on that, though). I discovered her MySpace page today and while most of it is really cute and it looks like she's having a ton of fun, her tag line is "f--k you" - and there is a photo of her flipping the camera off in her albums. While I already suspected foul language, I hoped that she might exercise some decorum with a networking sight that is so mainstream and that many people have been getting 'hurt' by. And, that many people exploit. I totally understand her having a place to exercise her point of view and to express herself, even if that means showing off with some attitude, but, I was disappointed with the tag line...am I over analyzing this? Is it okay for a 13 year old girl to use that phrase on the front of her MySpace page?

I sent her a private email, letting her know I thought she was too classy a kid to have that kind of phrase on her page and let her know I thought it was cool that she was expressing herself, but, that maybe she could rethink the tag line....and that even if she didn't see my point of view I would still respect her choice to leave that phrase on the page....I know, it's probably none of my business, but, I just don't want to see her hurt by it. She wants to come off soooo strong and all attitudinal and she is a strong kid, but, I don't think she's grown up enough to pull that phrase off on her page - furthermore, I think she is disrespecting herself by using that language and tone. Maybe if she gets hurt by it the lesson will mean more? But, maybe if an adult was watching out for her and just gave her information that she could ponder....?

I'm pretty sure her Dad doesn't know about the page or it's content and sometimes her Mom works too hard to be her friend, so, maybe no one is really giving her food for thought.

I'm trying to remember back that far and for some reason the selective memory is kicking in and I can't seem to find me at that age....and, we didn't have social networking pages on the internet when I was her age....the most I can remember at her age was riding my bike up and down the street and being shy around the neighborhood boys......I probably cussed, but, I knew better than to cuss in front of an adult, much less the whole world.
Posted by An Open Heart at 5:03 PM

Labels: Cussing at 13? Is that okay? Did I do that? How far is too far to whatch out for your niece?

It is quite sad to hear someone you love using such language in such a public place. It doesn't bode good and could attract the wrong types of people. But I guess at age 13, they don't listen anyway and mistakes are there to be made and learnt by.

Thanks, CJ, I really am at a loss. I don't wan to give up on her, but, I don't want to push her too hard and really send her down the wrong road.